Home » Banking » What is Fiscal Policy : Definition, Types and Purpose

What is Fiscal Policy: Meaning, Types, and Purpose. Fiscal policy is the government spending and taxation that influences the economy. Elected officials should coordinate with monetary Policy to create healthy economic growth. They usually don’t. Why? The fiscal policy reflects the priorities of individual lawmakers. They focus on the needs of their constituencies. These local needs overrule national economic priorities. As a result, fiscal policy is hotly debated, whether at the federal, state, county or municipal level. 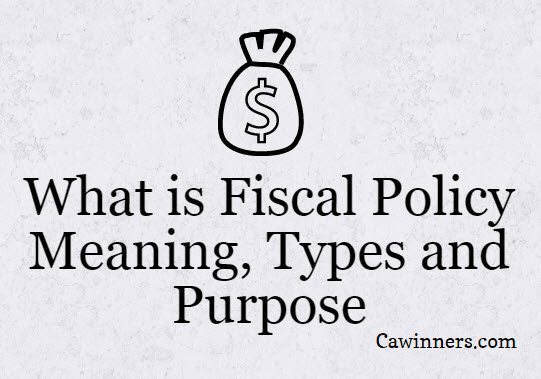 The first, and most widely-used, is

It stimulates economic growth. It’s most critical at the contraction Phase of the Business cycle. That’s when voters are clamoring for relief from a recession.

How does it work? The government either spends more, cuts taxes or does both if it can. The idea is to put more money into consumers’ hands, so they spend more. That jump starts demand, which keeps businesses running and adds jobs. Politicians debate about which works better. Advocates of supply-side Economics prefer tax cuts. They say it frees up businesses to hire more workers to pursue business ventures.

Expansionary fiscal policy is usually impossible for state and local government. That’s because they are mandated to keep a balanced budget. If they haven’t created a surplus during the boom times, they must cut spending to match lower tax revenue during a recession.
That makes the contraction worse.

Fortunately, the federal government has no such constraints, so it can use expansionary policy when needed. Unfortunately, it also means Congress created budget deficits even during economic Booms. That’s despite a national Debt ceiling. As a result, the critical debt to GDP ratio has exceeded 100 percent.

It is rarely used. That’s because its goal is to slow economic growth. Why would you ever want to do that? One reason only, and that’s to stamp out inflation. That’s because the long-term impact of inflation can damage the standard of living as much as a recession.

The tools of contractionary fiscal policy are used in reverse. Taxes are increased, and spending is cut. You can imagine how wildly unpopular this is among voters. Thus, it’s hardly ever used. Fortunately, a Contractionary monetary policy is effective in preventing inflation.

Unfortunately, the effects of any fiscal policy are not the same for everyone. Depending on the political orientations and goals of the policymakers, a Tax cut could affect only the middle class, which is typically the largest economic group. In times of economic decline and rising taxation, it is this same group that may have to pay more taxes than the wealthier upper class.

Similarly, when a government decides to adjust its spending, its policy may affect only a specific group of people. A decision to build a new bridge, for example, will give work and more income to hundreds of construction workers. A decision to spend money on building a new space shuttle, on the other hand, benefits only a small, specialized pool of experts, which would not do much to increase aggregate employment levels.

Fiscal Stance: This refers to whether the government is increasing AD or decreasing AD, e.g. expansionary or tight fiscal policy

Fine Tuning: This involves maintaining a steady rate of economic growth through using fiscal policy. However, this has proved quite difficult to achieve precisely.

Automatic fiscal stabilizers – If the economy is growing, people will automatically pay more taxes ( VAT and Income tax) and the Government will spend less on unemployment benefits. The increased T and lower G will act as a check on AD. But, in a recession, the opposite will occur with tax revenue falling but increased government spending on benefits, this will help increase AD

Discretionary fiscal stabilizers – This is a deliberate attempt by the government to affect AD and stabilize the economy, e.g. in a boom the government will increase taxes to reduce inflation.

Multiplier Effect: When an increase in injections causes a bigger final increase in Real GDP.

Injections (J) – This is an increase of expenditure in the circular flow, it includes govt spending(G), Exports (X) and Investment (I)

Hope this article will help you to understand what is fiscal policy in India. Share this article ” Fiscal Policy Definition, Types, and Purpose | PDF ” to your friends.