How to Calculate Depreciation U/s 32 of Income Tax Act

How to Calculate Depreciation U/s 32 of Income Tax Act. In the previous article, we have given How to Check Income Tax Refund Status Online and How to Calculate Advance Tax, Due Dates, and Payment. Today we are providing the complete details of Deprecation under section 32 of Income tax act. Depreciation is an accounting method of allocating the cost of a tangible asset over its useful life. Businesses depreciate long-term assets for both tax and accounting purposes. For tax purposes, businesses can deduct the cost of the tangible assets they purchase as business expenses. however, businesses must depreciate these assets in accordance with IRS rules about how and when the deduction may be taken. 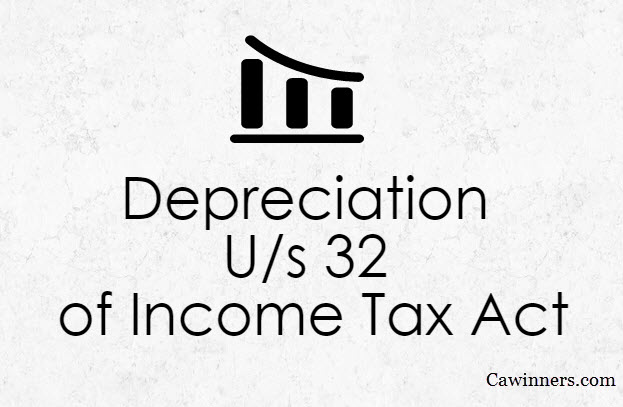 How to Calculate Depreciation U/s 32 of Income Tax Act

The depreciation computed on the tax return according to the income tax code and regulations. This amount is usually different from the depreciation used in the financial statements (book depreciation).

What is book depreciation?

What is the block of assets and how depreciation is calculated on block?

Block of Assets is used for charging the same rate of depreciation to a particular class of assets having same or similar characteristics. Income Tax Act has prescribed different rates for charging depreciation for different blocks
These are two blocks of the asset whatever asset purchased or sold by the assessee should be added or deducted within these blocks of the asset.

If WDV is negative then no depreciation is allowed, and the same will be considered as capital gain and the closing WDV will be zero.

If such amount is positive and no asset exists in the block, then such amount will be treated as a short-term capital loss and no depreciation is allowed

Calculation of Capital Gain on Sale of Depreciable Asset

The capital gain/loss from depreciable assets is always treated as short term irrespective of the fact that asset is held for more than three years or not.

From the above calculations if the result is a negative WDV, then such amount will be considered as short-term capital gains.

If such amount is positive and no asset exists in the block, then such amount will be treated as a short-term capital loss.

SECTION 32(1)(iia) in the case of any new machinery or plant (other than ships and aircraft), which has been acquired and installed after the 31st day of March, 2005, by an assessee engaged in the business of manufacture or production of any article or thing [or in the business of generation or generation and distribution of power], a further sum equal 20% of the actual cost of such machinery or plant shall be allowed as deduction under clause (ii)

And purpose of additional depreciation is to boost to the manufacturing sector.

Provision does not say that both should be same year, provisions means that both conditions of Acquisition and Installation should satisfy it may be in same or it can be in different year.Because of some reasons installation may not be possible in same year and if it will not be allowed only because that it is installed in different year it may become unfair for such enterprises.

Additional Depreciation @ 20% is available in first year of purchase for

In Case, Asset used for less than 180 days, then half depreciation i,e, 1/2 of 20% i.e.10% Depreciation available (Balance 50% of Additional Depreciation can be claimed in next year)