AS 11 The Effects of Changes in Foreign Exchange Rates 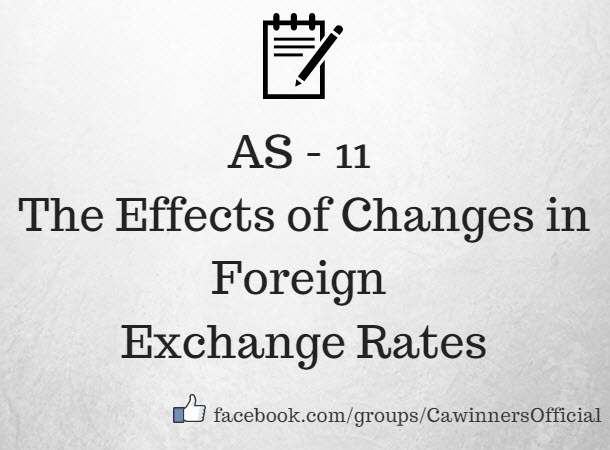 AS 11 Effects of Changes in Foreign Exchange Rates

1. This Standard should be applied:

2. This Standard also deals with accounting for foreign currency transactions in the nature of forward exchange contracts.

The following terms are used in this Standard with the meanings specified:

1. Average rate is the mean of the exchange rates in force during a period.

2. Closing rate is the exchange rate at the balance sheet date.

3. Exchange difference is the difference resulting from reporting the same number of units of a foreign currency in the reporting currency at different exchange rates.

4. Exchange rate is the ratio for exchange of two currencies.

5. Fair value is the amount for which an asset could be exchanged, or a liability settled, between knowledgeable, willing parties in an arm’s length transaction.

6. Foreign currency is a currency other than the reporting currency of an enterprise.

9. Forward rate is the specified exchange rate for exchange of two currencies at a specified future date.

11. Monetary items are money held and assets and liabilities to be received or paid in fixed or determinable amounts of money.

12. Net investment in a non-integral foreign operation is the reporting enterprise’s share in the net assets of that operation.

15. Reporting currency is the currency used in presenting the financial statements.

At each Balance Sheet date foreign currency monetary items such as cash, receivables, payables shall be reported at the closing exchange rates unless there are restrictions on remittances or it is not possible to effect an exchange of currency at that rate. In the latter case it should be accounted at realisable rate in reporting currency.

2) Exchange differences arising on monetary item which in substance, is net investment in a non integral foreign operation (long term loans) shall be credited to foreign currency translation reserve and shall be recognised as income or expense at the time of disposal of net investment.

3) The financial statements of an integral foreign operation shall be translated as if the transactions of the foreign operation had been those of the reporting enterprise; i.e., it is initially to be accounted at the exchange rate prevailing on the date of transaction.

5) In Consolidated Financial Statement (CFS) of the reporting enterprise, exchange difference arising on intra group monetary items continues to be recognised as income or expense, unless the same is in substance an enterprise’s net investment in non-integral foreign operation.

6) When the financial statements of non-integral foreign operations of a different date are used for CFS of the reporting enterprise, the assets and liabilities are translated at the exchange rate prevailing on the balance sheet date of the non-integral foreign operations. Further adjustments are to be made for significant movements in exchange rates up to the balance sheet date of the reporting currency.

7) When there is a change in the classification of a foreign operation from integral to non integral or vice versa the translation procedures applicable to the revised classification should be applied from the date of reclassification.

8) Exchange differences arising on translation shall be considered for deferred tax in accordance with AS 22.

10) Profit or loss arising on the renewal or cancellation of the forward contract should be recognised as income or expense for the period. A gain or loss on forward exchange contract intended for trading or speculation should be recognised in the profit and loss statement for the period. Such gain or loss should be computed with reference to the difference between forward rate on the reporting date for the remaining maturity period of the contract and the contracted forward rate. This means that the forward contract is marked to market. For such contract, premium or discount is not recognised separately.

Disclosure to be made for:

Non-mandatory Disclosures can be made for foreign currency risk management policy.

In respect of accounting period commencing on or after 7th December and ending on or before 31st March 2011 at the option of the enterprise, exchange differences arising on reporting of long term foreign currency monetary items at rates different from those at which they were initially recorded during the period or reported in previous financial statements in so far as they relate to the acquisition of a depreciable capital assets can be added to or deducted from the cost of the assets and shall be depreciated over the balance life of the assets and in other cases can be accumulated in a Foreign Currency Monetary Item Translation Difference Account and amortized over the balance period of such long term assets / liability but not beyond 31st March 2011 by recognition as income or expense in each of such period with the exception of exchange differences dealt with in accordance with paragraph 15 of AS 11.

Any difference pertaining to accounting period commencing on or after 7th December 2006, previously recognized in the profit and loss account before the exercise of the option shall be reversed in so far as it relates to acquisition of depreciable capital asset by way of addition to or deduction from the cost of the asset and in other cases by transfer to Foreign Currency Monetary Item Translation Difference Account, in both the cases by debit or credit, as the case may be , to the general reserve.